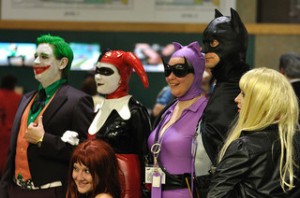 To describe the term ‘geek’, it would probably be more useful to watch an episode of “The Big Bang Theory,” an American TV sitcom revolving around a group of four exceptional intellectuals who are addicted to technology, sci-fi, comic books and fantasy.

Their pursuit for scientific academic studies and devotion to their own hobbies put them outside the mainstream. Most ordinary people who interact with them think they’re socially inept or weird in one way or another.

It is for people like the described characters above that “Geek Pride Day” was conceptualized in Spain in 2006. This annual celebration, which aims to promote their culture, was launched on May 25 to honor the first release of Star Wars film. The initiative spread around the world through the tool geeks are most adept in: the Internet.

Why Celebrate It at Preschools?

Letting the kids experience the geeky world can be a fun experience. For one, they love comic book characters and a make-believe session about them is a good exercise for their healthy imagination.

Further, many smart and passionate geeks like Isaac Newton, Thomas Edison and Benjamin Franklin have made valuable contribution to science. Apart from this, it’s also a good way for kids to empathize with different personalities at an early age.

Celebrating this day at preschools doesn’t have to be highly theoretical. Integrating simple activities in your lessons will do. Below are four ideas:

This popular geek accessory can be simply done by printing an eyeglass template and coloring the rims with black. You can use transparent or colored plastic cellophane for the lens. When you’re handling younger pupils, make sure you watch them while they’re cutting the eyeholes.

If your students can afford, why don’t you ask them to come to class on a special day wearing the costume of their favorite comic book or movie character? You can then facilitate customized games where they can act as heroes or villains.

If your school is located near a planetarium, try to arrange a visit and expose the kids to the solar system, constellations and other celestial bodies. Some museums and science centers bring their portable astronomy theaters to schools too so you might want to consider this option.

Since geeks are known for their love for mathematics, you can give your students extra number-related activities. Don’t forget to consider their pace, though, since your topic might get too difficult or too boring for them. Use geeky illustrations if it can make the lesson interesting for the class.

As Jedi knights would say to each other as they part ways, “May the force be with you.”