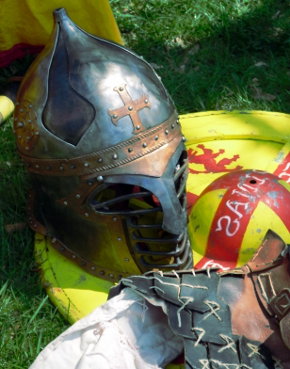 Believe it or not, learning about history can actually be tonnes of fun. Even if we consider a period centuries ago, such as the medieval period, we can immerse ourselves into the time by certain events, shows, movies, and games.

Let’s take a look at some ways children can be immersed into history without the chore of reading some boring old book! Before, you partake in some of the suggestions below it could be a good idea to get your children excited about the topic to break into groups and make their own coat of arms.

There is a show called “Medieval Times Dinner and Tournament”, takes place in nine theatres across equally as many cities. Click here to go to the show’s website and to see which locations it is playing. The show is family oriented, and features medieval style games where actors ride horses, engage in sword fighting, and entertain the family in what is an accurate depiction of the European Middle Ages. Taking children to an event such as this will surely teach them a few lessons on European history from the 5th to the 15th century. The shows incorporate medieval costumes, jousting, food, and music in this theatre style even that is likely to entertain and educate everyone in the building! Just be weary that you may have to adjust to eating without a spoon or fork, because if you ask for one, the in-character servers will pretend to not understand your request! It is truly an experience you or your children won’t forget.

There are hundreds of movies that take place during the Middle Ages. To get an idea as to what the times were like, you might want to pick up a copy of King Arthur, Conan the Barbarian, the Lord of the Rings or Excalibur, just to name a few.  Certain movies are very educational and can provide accurate historical representations. So then why not turn on the TV, pop in a DVD, and learn about the classes of clergy, knights and peasants in the Middle Ages, the architecture, as well as the religious conflicts, and all other focal points to this epic time period.

There are many medieval games out there that can provide loads of fun. Most parents will be hesitant to encourage their children to play video games, however, if they must, several games such as Dark Ages and Medieval Escape can incorporate great historical lessons. Plus, children and young boys in particular just seem to love the Middle Ages for the epic battles, scenery, castles, and Medieval characters. I’d advise any parent to make sure that the games aren’t too violent, but also don’t be too quick to discourage a budding history buff who dreams of being a knight some thousand years ago.

If you are fortunate enough to take your children on a family or class trip there are many museums that have an extensive Middle Ages collection such as the Louvre in Paris or the Tower of London in the UK. Europe is the best place to see the collections of the Middle Ages because of course you are able to stand on the very ground that the history was written.

About The Author:
Andrew Delaney feels very passionate about child development and their self-esteem. He firmly believes that Inspired Arts Resources increases self-esteem in children.